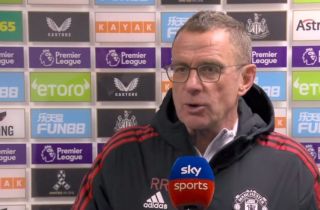 Ralf Rangnick was not happy with Manchester United’s performance at St James’ Park.

The Reds trailed 1-0 at half-time when the German decided to make a double substitution, with Edinson Cavani and Jadon Sancho coming on to replace Mason Greenwood and Fred.

Cavani turned out to be the perfect impact sub when he scored United’s equaliser but the Reds weren’t able to push on and clinch three points.

United were nowhere near good enough with and without the ball tonight and were lucky to get a point after an inexcusable performance against a poor Newcastle side that are likely to be in a relegation scrap this season.

There is a fear that Burnley and Wolves won’t fear United in the next two games, so there is a real need to improve over the coming days.

Rangnick told Sky Sports after the match that United can’t use any excuses for tonight’s display.

“We shouldn’t look for excuses, we just need to get better,” Rangnick said before adding that he was unhappy with the performance.

🗣 "We shouldn't look for excuses, we just need to get better."

Ralf Rangnick on whether the 16 days off is an excuse for their performance against Newcastle pic.twitter.com/gxH7nzQpaX

It will be interesting to see who makes the next line-up after tonight.

2 responses to “Manchester United can have no excuses after draw at St James’ Park, says Rangnick”