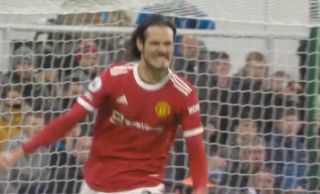 Edinson Cavani equalises with 20 minutes left on the clock.

Manchester United probably don’t deserve an equaliser but they find themselves in a position where they could take all three points from their trip to St James’ Park.

Newcastle had done so well up until Cavani’s goal and they will be gutted to lose the game now, but the Reds still have work to do with the scoreline 1-1 with plenty of time remaining.

Following a low cross from Diogo Dalot, Cavani sent his effort into the bottom right corner before the away end roared in response.

With 20 minutes to go #NUFC have lost their lead ❌

The king of Uruguay made an instant impact, but can Ralf Rangnick’s team get the job done before the full-time whistle?

The performance tonight has been abysmal.