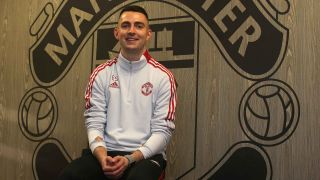 Manchester United are close to finalising a deal for Ewan Sharp to become an assistant coach and analyst.

The former Toronto FC coach is set to arrive from Russian club Lokomotiv Moscow, where Ralf Rangnick worked before moving to Old Trafford. It is understood that they both worked together at Red Bull and built a strong relationship while Sharp was at New York Red Bulls as performance analyst.

According to Sky Sports, Sharp is expected to come in and bolster the backroom staff following the departures of Michael Carrick and Kieran McKenna.

While Carrick is expected to enjoy some time with his family, McKenna has decided to challenge himself more than ever before by becoming manager of Ipswich Town.

Moreover, Sharp was a member of Chris Armas’ coaching staff at Totonto FC for six-months, but the head coach got the sack after two wins in 15 games.

It goes without saying that results need to be better at United.

Mike Phelan has remained part of the coaching set-up despite coming under mounting pressure to leave after he rejoined United with Ole Gunnar Solskjaer three years ago.