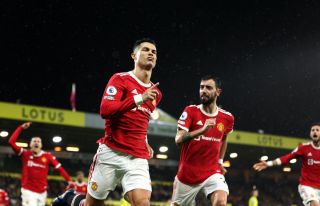 Manchester United take on Newcastle United on Monday, 27 December, in what will be our first game back after having two matches suspended following a COVID-19 outbreak within the club.

The Reds go into game week 19, sat sixth in the table and having to play catch-up. It is far from ideal for new interim manager Ralf Rangnick but he will still be looking to take each game at a time to ensure that United get more points on the board.

Newcastle look like they could get relegated this season and we want to see Rangnick’s Reds tear them asunder to increase the chances of that happening. They have managed just one win since the beginning of the season.

Eddie Howe’s defence will be up against it again on Monday night (8pm kick-off) and it won’t help that United have been handed a boost with Cristiano Ronaldo returning to training on Wednesday.

Cristiano Ronaldo back in training at Carrington this morning. New assistant coach and analyst Ewan Sharp also at the training ground #mufc

United reopened their training ground for the first team on Tuesday.

A day later, a key man has returned just in time for the match.

This would suggest that Ronaldo was one of the players not to test positive for COVID-19, but with so many players considered ‘close contacts’, it was only right for everyone in the group to self-isolate.