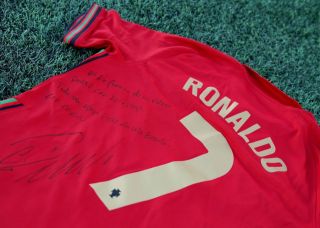 Manchester United star Cristiano Ronaldo has offered his support to the victims of the La Palma volcano eruption, which erupted back in September, after putting a signed Portugal shirt up for auction.

After living with a volcano for 80+ days, the people on the Spanish island are hopeful that the volcanic activity has come to an end, despite warnings that it’s too soon to say for sure.

The experts claim the eruption cannot be declared over until Christmas Day.

Maria Jose Blanco, head of the National Geographic Institute in the Canaries, recently said that a 10-day period must elapse before the end can be confirmed, as per El Paris.

However, in a bid to raise money for those affected by the disaster, Ronaldo has put a signed Portugal shirt with his name and number on the back up for bidding, featuring a message of solidarity with the victims.

Ronaldo wrote, as quoted by the Manchester Evening News: “Not even the force of a volcano will be able to with La Palma. All my support for the beautiful island.”

It’s a fantastic gesture from the United man, who certainly wouldn’t have been forced to act, but it shows a great deal of generosity on Ronaldo’s behalf.