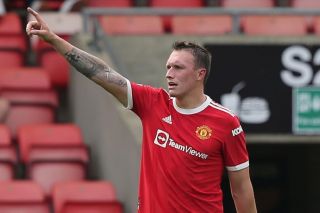 Phil Jones could join Benfica on loan in January.

The Manchester United defender turned down moves to the Championship in the summer, according to sources close to the player, yet that could still pay off if he is able to land a move to Benfica after a horrid spell out with injuries.

According to the Daily Mail, Benfica are currently looking to bring in a versatile defender on loan with Jones being tipped as one of their options.

Jones’ last two campaigns have been completely blighted by injuries and he has not made an appearance for the senior side since he scored in the 6-1 FA Cup win over Tranmere in January 2020.

Benfica know they would be taking a risk with Jones, but the Portuguese club will be rewarded if they can keep him fit.

The England international could arrive with a wealth of experience at the top level – for both club and country – and he can play in a number of different roles.

Whatever happens, we wish Jones the very best.