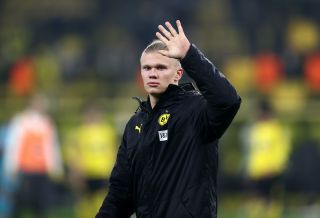 Borussia Dortmund director Michael Zorc doesn’t sound overly confident about keeping the Norwegian striker after this season ends. That means it could be Dortmund’s last season with Europe’s most wanted goalscorer and there will be an almighty race to securing his signature.

Manchester United already lost out on signing Haaland two years ago when he left Red Bull Salzburg for Borussia Dortmund, but it would be ridiculous to think that gave the Reds reason to forget about future pursuits, especially now with the 21-year-old renowned as one of the best players in the world.

Haaland is good enough to transform any side and he’d bring more than enough goals to help our fight for Premier League success.

His agent, Mino Raiola, recently downplayed a potential transfer to United with ridiculous remarks about Man City having more Premier League titles than us.

Transfer guru Fabrizio Romano has tweeted quotes from a Sky Germany interview with Michael Zorc, who was asked about Haaland’s post-match actions following Wednesday night’s win over Greuther Furth as he went to all four sides of the ground to applaud the fans.

Borussia Dortmund director Zorc on Erling Haaland’s future: “We’d like Haaland to stay. We don't have to give him up – not even for economic reasons”, he told Sky 🟡🇳🇴 #BVB

“We also know that under certain conditions Erling has the opportunity to leave” he added. @ReshadRahman_

“We’d like Haaland to stay,” Zorc said. “We don’t have to give him up – not even for economic reasons.”

He added: “I also saw the pictures and that looked a bit strange.

“I asked him what was behind it and he answered: ‘nothing at all’.

“Of course he will definitely stay.”

A reported £64m release clause is set to come into effect in the summer and Zorc was unable to say how long he thinks Haaland will be at the club.

“Of course we would like him to stay in Dortmund over the summer … but we also know that under certain conditions he has the opportunity to switch and we will certainly have talks with him in the next few weeks.

“We have a long-term contract with him, so he has to take action first and not us. Everything would be cool for us if it stayed that way.”