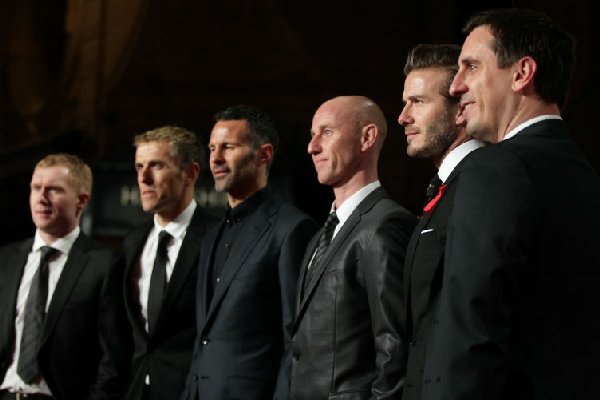 The Class of ’92 is a documentary film about six Manchester United players as adolescents. So if you want to learn something new about legends such as David Beckham, Nicky Butt, Ryan Giggs, Gary Neville, Phil Neville, and Paul Scholes, who broke through and were key to the club’s success in the 1990s, you should take a look, as they are the focus of this documentary.

The film, directed by brothers Benjamin and Gabe Turner, includes interviews with the major characters, as well as their teammates, coaches, and contemporaries, and situates their narrative within the greater cultural and political background of the United Kingdom at the time of their ascent to stardom.

According to the prominent movie directory website IMDb, the film was released in December 2013 with a budget of $1,250,000. Aside from these outstanding reviews, the picture has an 8.1/10 rating on the same website but a 4.1/5 rating on Rotten Tomatoes, and it is certainly a fan favourite.

Yes, it’s about some of football’s most incredibly dull players playing for a storied club, but it’s also about a group of dynamic British players who went on to dominate Europe in a way that we’re unlikely to see again.

The Class of ’92 interviews a number of personalities from both within and outside the sport, in addition to the major protagonists, Beckham, Butt, Giggs, Scholes, and the Neville twins. Former Manchester United striker Eric Cantona is interviewed for the film, as is Zinedine Zidane, who played against the characters during his career. Danny Boyle, the Academy Award-winning film director, Mani, the Stone Roses bassist, and Tony Blair, the former British Prime Minister, are among the cast members. Eric Harrison, Robbie Savage, Georgie Switzer, and John O’Kane, who aided in the development of the legendary young players’ talent levels, all appear in the video.

The players in question are referred to as “The Class of ’92” as the majority of them were promoted to Manchester United’s first team in 1992. The Neville brothers were part of the foundation of United’s legendary youth squad of 1992, who progressed through the ranks as friends and under Alex Ferguson, went on to win trophy after trophy.

Scholes and Phil Neville were members of the side that reached the final the following season. Giggs made his first-team debut in 1991, and Beckham, Butt, and Gary Neville followed in 1992. Scholes made his professional debut in 1994, while Phil Neville joined the team in early 1995.

Where can I watch it?

More on out of their league

In 2015 and 2016, the BBC aired two seasons of Out of Their League, and a third season, Class of ’92: Full Time, will air on Sky Sports in 2017. As seen in the video above, the organisation has sponsored promotional and fund-raising friendly matches between the Class of ’92 XI and Salford City. Beckham, for example, is not involved in the Salford idea, but he is a key participant in a push for a Major League Soccer club in Miami. In addition to pursuing careers in film and documentary media, the Class of ’92 collaborated with Adidas to release the Adidas Ninety-Two, a limited-edition trainer, in 2017.

Why should I watch it?

Whatever your feelings towards Manchester United Football Club are, which can only be lifelong love or deep loathing, the documentary The Class of ’92 has the potential to become mandatory viewing for all football aficionados. Overall, this could be a reason to put personal squabbles aside and appreciate one of the most incredible football stories of the modern period, even if it is through clenched teeth.