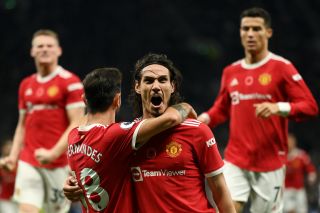 Edinson Cavani may have already played his last game for Manchester United.

We know from speculation over the last year that Cavani is wanted by several clubs in South America, with Boca Juniors making more headlines than the other teams.

Cavani decided to stay at Manchester United for another year when many were talking about his eagerly awaited return to South America, but he has spent most of this season in the treatment room than on the pitch.

It’s been far from ideal because whenever he’s been brilliant for United. If we didn’t sign Cristiano Ronaldo in the summer, it would be an even bigger issue among fans.

However, in eight appearances this season, the 34-year-old has one goal to his name, so I don’t think the club would stand in his way of leaving in January.

According to Tyc Sports, Cavani will again reject Boca Juniors and hopes to sign for Barcelona.

The Catalan giants were dealt with a blow during the week as Sergio Aguero announced his shock retirement, but the La Liga giants could move for Cavani as a short-term replacement if they can find the funds.

Let us know if you think Cavani will join Barcelona next month.