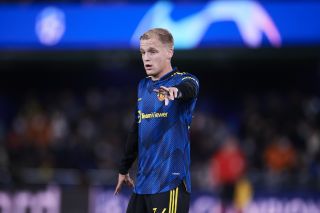 You should be able to see why Ralf Rangnick wants to reshape the squad. There’s a number of players like Donny van de Beek who are destined to get more football under the German, but that means several players could be on the way out.

Ole Gunnar Solskjaer left Manchester United in a much healthier state than Jose Mourinho and I don’t think Rangnick has too many complaints over the squad he has inherited.

It will take some fine tuning over the coming transfer windows to get it right but Rangnick has already hinted that he will look to trim the squad in January, although there are unlikely to be any new arrivals unless a target becomes available.

According to the Mirror, Donny van de Beek is valued by Rangnick and will not be allowed to leave the club. This is big news because when Ole Gunnar Solskjaer was in charge nobody could see a future for the Netherlands international at United.

Dean Henderson has been linked with a move away from Old Trafford after failing to take David de Gea’s place as first choice goalkeeper this season. We’ve also had Anthony Martial’s agent run to Sky Sports with his client’s desire to leave the club.

I’m happy to hear Van de Beek will be staying at United.

Although I’m not fully convinced by his displays in a United shirt –under Solskjaer and Rangnick – I believe talented players deserve more opportunities than others.

Van de Beek was developed as a system player from an early age and I think Rangnick will find ways to give him more game time than the previous manager.

It’s up to Van de Beek to impress after that.