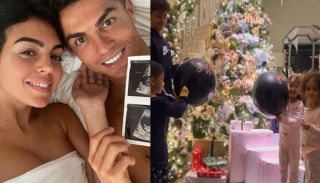 The 36-year-old, who rejoined Manchester United in the summer after a shock move from Juventus, and his 27-year-old other half took to Instagram to share the video with their millions of followers.

Ronaldo’s four children can be seen gathered around their Christmas tree awaiting the exciting news.

Georgina does a countdown in Spanish but before she could finish, the children popped the balloons and everything was revealed… they’re having a boy and a girl after announced they are expecting twins back in October.

“Where life begins and love never ends #blessed,” Ronaldo and Georgina wrote in the caption.

Ronaldo previously said that he wanted a total of 7 children and this will be number 5 and 6.

One more strike away from glory, eh?

We would like to send a huge congratulations to the couple on their wonderful news.