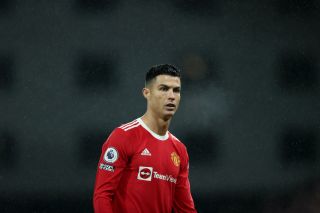 Sky Sports News reporter Ben Ransom was stood outside Carrington training complex this morning to give an update on the Manchester United squad amid reports of 19 positive COVID-19 tests within the club.

That saw Tuesday night’s Premier League clash with newly promoted Brentford postponed and there are still doubts over this weekend’s game against Brighton.

We’ve missed watching United, too, and have had to settle with watching other teams in recent nights, with the Premier League deep in the middle of the hectic festive season.

Ransom told Sky Sports News that Cristiano Ronaldo was not spotted arriving at the training ground this morning – but only a few players were present with Ralf Rangnick:

“Today, few players and the manager have come in and no signs of Cristiano Ronaldo himself at the training ground. Medical teams are having lengthy discussions inside the building.”

“Today, few players and the manager have come in and no signs of Cristiano Ronaldo himself at the training ground. Medical teams are having lengthy discussions inside the building” #mufc #mujournal

The club are not giving anything away really, apart from last night’s brief to the Telegraph that there are 19 positive cases, along with the reluctant belief that Saturday’s game should be postponed.

We still don’t know who has tested positive for the same virus Dean Henderson suffered with at the beginning of the season and he was kept out of action for some time whilst in recovery.

This means that at least two of our fixtures may need to be shoehorned in before the end of the season, which is far from ideal when we want to be going far in the Champions League.

It certainly does anything but help Ralf Rangnick’s plans for the squad, but their health is most important.