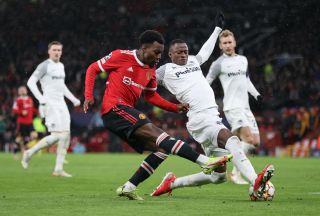 After impressing interim manager Ralf Rangnick, it is understood that Anthony Elanga is on the verge of signing a new long-term contract at Manchester United.

The young Swede made his Champions League debut at Old Trafford against Young Boys under Rangnick.

Another aim for Elanga will be to play in a World Cup – like his father Joseph Elanga did in 1999 playing for Cameroon.

But now, according to the Telegraph, the academy graduate is in talks with United over a new long-term deal to extend his stay at the club. He has been at the club since he’s been 14 but only really made a name for himself after getting in the U18s squad.

On the contract front, this is not only brilliant news for Elanga, but United also – and Rangnick has already made it clear that he rates the forward.

Can Elanga become the new star of Manchester United like a fellow Swede did years ago?

Only time will tell and it will be intriguing to see how much football he gets between now and the end of the season.

It was great to see him finally get a run in the Champions League and we hope he can add more goals to his account soon.