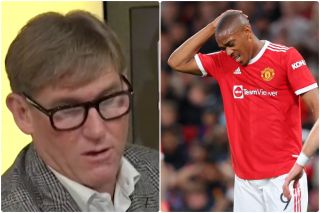 The German coach still needs to settle on his preferred line-up, but the early signs show that he is willing to give everyone a chance. That has not stopped Anthony Martial’s agent from mouthing off to the press, though.

It is understood that Martial wants to leave United in January but Rangnick claims he has not heard anything from the player on the matter.

After blowing hot and cold for too many years, Martial finds himself further down the pecking order at Old Trafford, where he broke onto the scene as a youngster scoring against arch-rivals Liverpool.

However, the arrivals of Cristiano Ronaldo and Jadon Sancho only made matters more difficult for the Frenchman, and he is unexpected to come back into the team anytime soon.

TalkSPORT’s Simon Jordan believes Martial is “a player with all the ability but a heart the size of a pea.”

❌ “Martial is one of those players that gets you the sack.”

❤️ “He’s a player with all the ability but a heart the size of a pea.”

Simon Jordan says if Martial wants to leave #MUFC they should get rid ASAP. pic.twitter.com/lsNPL6CNHO

It would not surprise us if Martial was moved on in January.