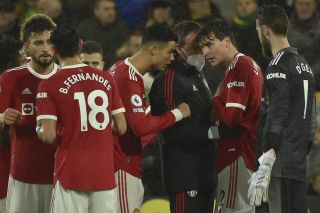 Manchester United are not in action tonight but they have released an update on Victor Lindelof’s fitness after the centre-back had to be forced off during the 1-0 win over Norwich City on Saturday.

The Sweden international crouched down in the second half and it was clear that he was struggling to breathe. Once the medics rushed on it everyone knew he had to be replaced.

That led to Eric Bailly’s introduction for the remainder of the match as United went on to secure three points.

However, Manchester United have released a statement on Lindelof, saying: “Victor is currently undergoing a series of precautionary investigations. However, he has recovered well from the episode he experienced in the match against Norwich.

“All indications are that this is not linked to any COVID outbreak within the club.”

We also had an update from Lindelof’s wife, who we didn’t know had a blog, so things are looking better for the Swede already.

Of course, the Premier League had to postpone tonight’s trip to Brentford due to a rising number of COVID-19 cases within the squad.

The training complex at Carrington is shut for the first team with players and staff expected to self-isolate over the coming days.