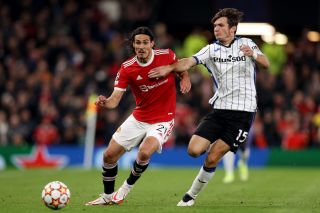 It been frustrating that we haven’t seen Edinson Cavani in action more at Manchester United.

The Uruguayan is an outstanding player but after spending 14 years of his career playing football in Europe, it’s started to take a toll on his fitness.

Cavani, 34, performed so well towards the end of last season that the club decided to extend his contract by a further year.

However, the striker has played just 274 minutes of football for the Reds so far this season and he’s been out injured recently with a tendon problem.

With Cavani’s contract set to expire at the end of the season, a move away from Old Trafford could be on the cards.

Cavani’s brother and agent, Walter Guglielmone has told Globo Esporte that they are listening to offers and that a move to Brazil would be preferable.

“We have to wait a bit (about a return to South America), we will see what possibilities exist,” Guglielmone said.

“Obviously, if any team from Brazil comes up with a good project, we can always listen.

“I have an obligation to get Cavani all the options.”

Cristiano Ronaldo signed a two year contract when he joined the club in the summer, so it wouldn’t make sense for United to offer Cavani a new deal.

We should be looking at a younger striker in the summer and get rid of Anthony Martial.