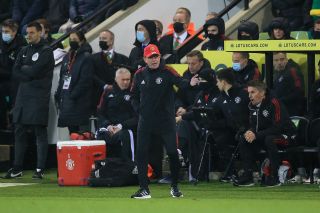 Manchester United interim manager has made it very clear he doesn’t care about what Anthony Martial’s agent says to the media.

Martial’s agent, Philippe Lamboley, says his client wants to leave Old Trafford in the January transfer window but the player has yet to make that clear to Rangnick.

In an interview with Sky Sports last week, Lamboley said: “Anthony wishes to leave the club in January. He just needs to play. He doesn’t want to stay in January and I will speak to the club soon.”

The Frenchman has been a frequent absentee this season, mostly due to injuries, but his career will completely nosedive if he continues to fall down the pecking order at United.

Cristiano Ronaldo and Jadon Sancho coming in last summer will only make it more difficult for Martial to get game time once he returns to fitness.

We know from previous press conferences that Rangnick likes to focus on football. He won’t get sidetracked with with things that don’t concern him or the club and quickly shoots things down.

Rangnick has responded to the claims made by Martial’s agent.

“The player hasn’t spoken with me or us about it,” Rangnick said, as per Goal. “To be honest, what his agent says via the media is not of that much interest to me.”

Asked if he would speak to Martial to find out what he wants to do he replied: “No. Then I would react to what his agent has said and it should be the player. If he really has the wish to go to another club it should be the player who informs either the board or myself. I have never spoken about a player via the media and via agents.”