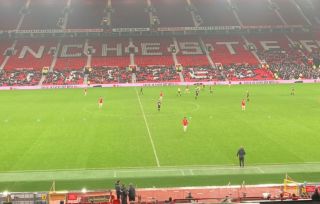 It was the start of Manchester United U18s FA Youth Cup campaign and the young Reds were to play Scunthorpe United.

Despite the COVID-19 outbreak in the U23s squad, this did not affect the U18s game and the match between the two would go ahead as planned.

There was a limited audience at Old Trafford but this did not stop away fans making a noticeable appearance. In the first minutes, Scunthorpe United were quite dangerous, even winning a free kick in a dangerous area but United were attentive to every ball.

In the following minutes, United were heavily in possession and dominating the game but no clear cut chances were being made as the players were mostly focusing on wing player. Garnacho has been lively at the start of the game and he had a brilliant chance but his shot was well over the bar. At some point United were bound to break through and this happened through Mather who tapped the ball into the net.

First it was Charlie McNeill who took a shot and forced a save. However, under pressure the keeper did not clear it well enough and Garnacho crosses it to Mather.

Since the goal it has been all United and in the 18th minute, Oyedele from distance took a chance and forced a save from the goalkeeper. Manchester United kept dominating, however the away side still created chances on the counter.

In what seemed a rather confusing moment, Louis Jackson was brought down but Scunthorpe were having none of it and for a moment there it seemed like hell broke loose. United needed to make their presence known and a brilliant goal was on the way. Isak Hansen-Aaroen with a brilliant through ball towards McNeill, who then goes for a falsetto and the balls fall at Garnacho’s feet and the ball ends in the top corner.

Things were going very well for United’s U18s as they had everything under control and Scunthorpe were staying at bay. However, a weird situation in United’s box, with Jurado not making enough contact to intercept, Lewis had enough space to send the ball in the end of the net. During the added time, United had the best chance to restore their two goal lead as McNeill has his shot saved and Garnacho messes it up in the rebound.

A brilliant first half for United with McNeill and Garnacho so lively upfront. Things were under control at this point and they just needed a bit of management. Coach Travis Binnion would probably mostly focus on that at his half time talk.

Despite leading 2-1, United were once again pressing high up the pitch and this worked as a charm with Oyedele perfectly executing an outside of the area shot sending it to the bottom corner. It did not take long after this for McNeill to finally move and put his name in the scoresheet with a great ball from Mainoo. He then goes over at Scunthorpe’s away end and shushes them, getting booked.

It has to be said that this away end has been quite noisy but has motivated McNeill and Garnacho quite a lot as both have had chances to make this into a goal fest for United. Mather and Oyedele obviously involved as they kept pushing forward. A free-kick response was on table for Scunthorpe as United are caught off guard and Robertson puts the ball in the net. In the space of just a few minutes United make two quick changes with Oyedele coming off for Daniel Gore and Ennis coming on for Garnacho with the later being applauded by the crowd at Old Trafford after a brilliant goal and excellent performance.

McNeill made one final attempt at scoring before coming off for Norkett. His shot hit the post after a well-controlled ball with McNeill obviously not afraid of making those decisions. Norkett on the other way almost makes a quick impression but is met with two Scunthorpe defenders who blocked his shot. Despite not being mentioned quite as often as our forwards, it should be noted that Fredericson and Jackson have been well organised in the heart of the defence and did well to break up play. Vitek had his part to play as made an excellent save even though that the flag was up after a few seconds.

There was not much history after this with United making it to the next round in a classy, yet energetic and eventful evening. Next up for Manchester United’s U18s in the prestigious FA Youth Cup will be Reading. With this performance, United may go all the way but there are still things that we need to work. Pressing high up, free flowing attacking football and well organised at the back, a brilliant display overall.

The crowd definitely lived up to the occasion.