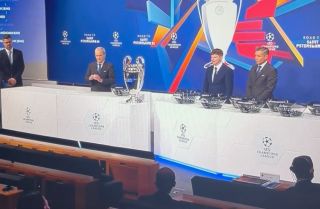 There is a lot of confusion about whether the Champions League round of 16 draw will stand.

Manchester United were drawn against Paris Saint-Germain but it was clear that our ball was not put into the bowl to face La Liga champions Atletico Madrid – after an initial error seen us drawn against Villarreal, who we already played in the group stages.

The system they use is pretty basic so it’s unknown to everyone how they managed to mess it up.

One thing is certain – in the end, UEFA got what they wanted with Cristiano Ronaldo and Lionel Messi set to face off in the next round of the prestigious competition.

You can see in the video below that United were not put back into the pot to face Atletico Madrid, with the screen behind the stage also ruling us out as a potential opponent for Diego Simeone’s side.

You can't convince me this isn't rigged.pic.twitter.com/W2rDtzkYRG

Well respected football journalist Miguel Delaney has since tweeted about the incident and believes the draw will be allowed to stand despite confusion over United/Atletico.

From talking to a few within Uefa at moment, early indications are that draw will be allowed stand despite the confusion over United/Atletico, but let's see…

The next question is whether United decide to appeal the draw.