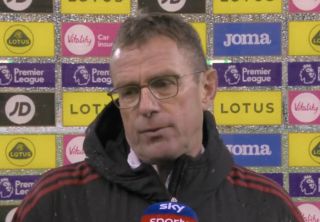 Despite the match being a drab affair, star forward Cristiano Ronaldo was the goal-scoring hero after successfully converting a penalty from the spot.

Regardless of Ronaldo’s match-winning goal, all the plaudits went to goalkeeper David De Gea, who not put in an amazing performance but also notched the 200th clean sheet of his domestic and international career.

Speaking after the game, Rangnick gave his thoughts on his side’s performance and admitted he praised Smith for how the Canaries made life so difficult for the Red Devils.

“I already told Dean [Smith] that I thought they played extremely well,” the German told Sky Sports. “They didn’t at all play like a bottom team.

“Always proactively defending forward, in fact, they played like we played against Crystal Palace.”

🗣 “On this kind of level you need to be physically present.”

Ralf Rangnick criticises the physical intensity from his Man United team which made the game difficult for them pic.twitter.com/VxldAg6tXn