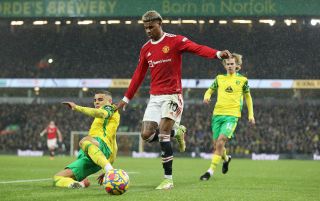 Manchester United come away from Carrow Road with three points.

It wasn’t a good performance and we know that most teams in the Premier League would’ve took advantage of that today, but at least Manchester United picked up three points and kept another clean sheet.

Here are the five things we learned from the 1-0 win over Norwich City.

United were lethargic from the start and sat too deep.

The team failed to press as a unit aggressively, which allowed an average Norwich City side to match the Reds in every department, but the lads showed enough spirit to get across the line thanks to a second half penalty.

It didn’t help that our passing was as sloppy as our play in the final third, but it looked like teething problems more than anything as we managed to win the match, keep a clean sheet, and take our winning run to 3 games in the Premier League.

Feed the GOAT and he will score!

Bleacher Report tweeted a photo of Cristiano Ronaldo celebrating his winner at Carrow Road, only for a number of Norwich City fans to be seen taking snaps in the background.

Norwich fans had their phones out filming Ronaldo's celebration 📸 pic.twitter.com/KggPBovbjc

Imagine doing that at Old Trafford after seeing a player from the opposition score? Heh.

Ronaldo’s goal means he has now scored against 165 different teams in his career (120 clubs, 45 countries), with Norwich being the latest victims.

Rashford not at the races

I’m beginning to question whether Rashford was rushed back in October because he has been off the pace since then.

The England international was lucky to stay on the pitch at half-time and Ralf Rangnick’s decision to take off Jadon Sancho in the second half raised a few eyebrows.

It may be time to take him out of the team for a bit and let Mason Greewood share the spotlight.

Best goalkeeper in the world

Yes, I honestly think we can start talking about David de Gea being the best in the world in the world again. This must be amazing for the fans who stood by the Spaniard when others began calling for Dean Henderson to be first choice.

Today he was man of the match with three key saves to keep United in the game.

United desperately need to get a run of wins together.

We now have three consecutive wins in the Premier League and should be making it four against Brentford next week.

That will only help this team believe ahead of a busy schedule and they should be more familiar with the new system in the coming weeks.