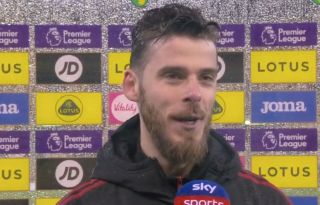 David de Gea earned the man of the match award after his display against Norwich City at Carrow Road.

Back to his very best, the Spaniard managed to keep Manchester United in the game with three fine saves in the second half.

The team’s overall performance was lethargic and I would fear a very different result had we not had De Gea between the sticks.

It’s only natural to feel good after a match-saving performance like that, and De Gea made it clear he was proud in his post-match interview with Sky Sports.

🗣 "I was feeling very good, I was enjoying the game."

David de Gea is happy with his MOTM performance against Norwich City pic.twitter.com/so1gjtsYoo

De Gea said: “I was feeling very good, I was enjoying the game.”

We’re glad someone could enjoy it, though I’m sure the Reds in the away end had a good time ahead of a long trip home.

Time for another clean sheet when the lads take on Brentford?