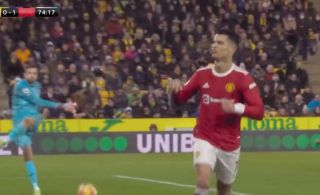 Cristiano Ronaldo opens the scoring at Carrow Road from the penalty spot.

Although Manchester United have not been at the races this afternoon, the Reds now hold a 1-0 lead with less than 15 minutes left of normal time.

Ronaldo struck his penalty with sheer power to beat Tim Krul, who dived the wrong way, and we knew from the minute he stood up that it was going to be 1-0.

A thumping penalty from Ronaldo 🎯

Was it the correct decision?

Max Aarons gave away the penalty after pulling Ronaldo to the ground inside the box. It went to VAR but the penalty stood following the check.

It could be back to back 1-0 wins for Ralf Rangnick in the Premier League.