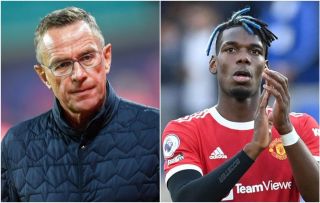 Ralf Rangnick is spot on when he says it is not his job to convince Paul Pogba – or any other player for that fact – to stay at Manchester United.

The German has come in as interim manager for a six-month period, but he will have to deal with the midfielder’s future whether it’s as the manager or a consultant to the board.

And, with Pogba out of contact next summer, the Frenchman has yet to sign a deal that has been tabled by the club, as per GQ.

Rangnick told reporters on Friday that he spoke with Pogba over the phone during the week and that they are scheduled to meet in person for the first time on Sunday.

He added that it was not his job – nor that of anyone else at the club – to convince any player to stay at United.

“Players have to want to stay and play for the club,” said Rangnick, as quoted by Sky Sports.

“This is such a massive club [with] such fantastic support, I don’t think that anyone in the club should then try to convince the player to stay.

“But on the other hand, let’s wait and see. I’ve spoken with him for 15 minutes over the phone a few days ago. Let’s have him come back, get fully fit, train with the team and then we will see where we stand [and] how the team has developed by then.

“He can be an important player, I’m fully aware of that, but this is true for all the other players that we have.

“I’m not only the coach of Paul Pogba once he’s fully fit, I’m also the coach of all the other players and my ambition is to make them better, to develop each individual player, and this is only possible by improving the performance of the whole team.”

I feel we’ve already spent too much time on Pogba’s contract – to a point the club has allowed him to wind down his contract to potentially leave on a free.

It will be a relief when all of this is over.