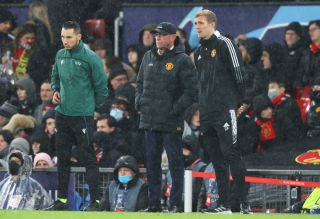 Having made eleven changes to the side that faced Young Boys on Wednesday night, Ralf Rangnick is expected to mix it up again for Manchester United’s trip to Norwich City in the Premier League.

As it turned out, United suffered as a result of squad members playing without much game time under their belt, but they still managed to top Group F despite drawing 1-1 with our Swiss opponents.

The only player to really impress was Mason Greenwood and he should feel unlucky to miss out in our predicted XI.

Norwich City host the Red Devils and currently sit at the bottom of the Premier League on 10 points, so they are unlikely to get anything from this game with Rangnick’s tactics likely to see United hit them from the start.

We’ll be backing Rangnick to go strong, with Fred and Cristiano Ronaldo brought back into the XI.

David de Gea will return behind a back four of Diogo Dalot, Victor Lindelof, Harry Maguire and Alex Telles.

The team will set up in a 4-2-2-2 formation with Fred and Scott McTominay sitting deeper than Jadon Sancho and Bruno Fernandes. Rangnick will be hoping for better link up play than last week, when United should’ve been well ahead after 30 minutes against Crystal Palace.

Up front, the forward line will be a front duo of Ronaldo and Marcus Rashford.

Rangnick revealed at his press conference that he is waiting on a fitness test for Aaron Wan-Bissaka, who had to be carried off the pitch on Wednesday night, with Nemanja Matic being another doubt.

I decided to leave Raphael Varane out of this XI but I would keep an eye on the embargoed section of Rangnick’s press conference to see if the reporters asked for a fitness update.

It wouldn’t surprise me if Varane started ahead of Lindelof.