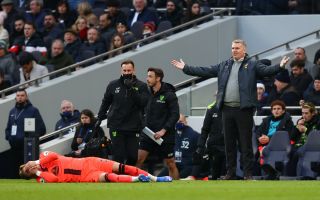 Norwich City manager Dean Smith has some concerns ahead of his side’s Premier League clash against Manchester United.

Sat deep in the relegation zone at the bottom of the table, the Canaries have one draw and two wins under their new manager, who was recently sacked by Aston Villa. That is the sort of uplift in form their fans needed to see but we will be hoping United rain on that parade this weekend.

Smith would’ve wanted a fully fit squad to face the Red Devils, though he has confirmed that he is waiting for updates on four players ahead of Saturday’s game.

A number of those players are waiting on COVID-19 PCR test results and other players have sustained knocks, but Smith was unwilling to reveal any names at this point.

“The couple of players who we are worried about (in terms of Covid-19) have been tested. It is not likely to be related to the game at Tottenham Hotspur as our first round of testing was all clear, but the players are all aware of the importance of looking after each other, social distancing and wearing masks.”

United loanee Brandon Williams have impressed under Smith after spending some time out of the team, but he won’t be available to face his present club on Saturday.

Manchester United should be beating Norwich regardless

On paper, at least, we should be walking all over these. United also need to gain a bit of momentum over the coming Premier League fixtures to go on a run and Carrow Road is the perfect place to start.

A lot of players had a week-long rest after sitting out United’s 1-1 draw with Young Boys in the Champions League, so it will be back to trying to implement Ralf Rangnick’s tactics in a probably 4-2-2-2 formation.

If we play like we did against Palace, I can see United giving Norwich a hammering this weekend. Mason Greenwood was the only player to impress midweek so he might be set for another start.