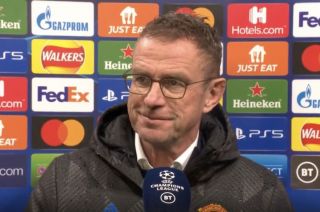 Following a 1-1 draw against Swiss side Young Boys, Manchester United have topped their Champions League group.

The Red Devils, who faced Young Boys in their final group stage match on Wednesday evening, named a heavily rotated side that included several fringe and youth players.

Despite the much-changed side, United was able to come away from Old Trafford with a point and seal their place at the top of Group F.

Mason Greenwood fired the Reds into an early lead after just nine minutes with an acrobatic volley but Ralf Rangnick’s men were pegged back just before the halftime break.

With the second half seeing either side provide very little, the German tactician’s post-match interview saw him content with the result but slightly disappointed with his side’s reluctance to move the ball out of defence quicker.

Speaking to BT Sport after the game, Rangnick said: “What was really a little bit annoying was the way we also gave the goal away.

“We played too many balls into the first line of their pressing area and this was also the case with the goal that we conceded.

“We could have cleared the ball easily and wherever we played the ball into the second or third line we were always dangerous.

“I told them that before the game but they still played in that situation the ball five-metre pass and they were just waiting.

“It was more or less a pressing invitation that we sent.”

Ralf Rangnick gives his verdict after his first #UCL game in charge of Manchester United.