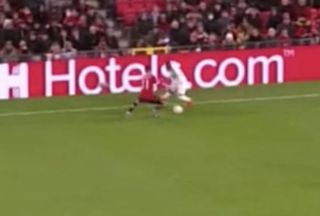 After entrusting him to lead his line during Wednesday night’s final game of this season’s Champions League group stage, Man United interim manager Ralf Rangnick will so far be very pleased with Mason Greenwood.

Although the Red Devils have already qualified for the prestigious competition’s knockout phase, the club will still be hoping to top the group and they’re well on their to doing so after Greenwood opened the game’s scoring after just nine minutes.

After firing in a sensational flying volley, Greenwood has continued his impressive first half and has even been spotted putting in some serious work rate.

Not only did the young Englishman expertly recover the ball in the final third, he then went on a brilliant wide run before setting up teammate Juan Mata.