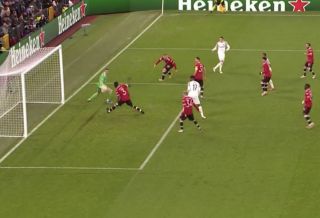 Despite coming into Wednesday’s final game of this season’s Champions League group stage as the overwhelming favourites, as well as taking an early lead, Ralf Rangnick’s Manchester United have been pegged back by Swiss side Young Boys.

Failing to extend their lead though, just minutes from the halftime break, the Red Devils saw midfielder Fabian Rieder unleash an excellent strike to beat Dean Henderson and level the score at one each.

Although the better side overall, United have been lucky to go into the break all square after Young Boys almost netted a second.

However, thankfully, centre-back Eric Bailly was in the right place at the right time and somehow managed to keep Young Boys’ effort out of the net.

How he managed it though – we’re not quite sure though.