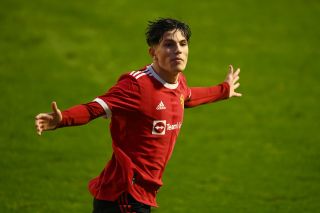 Manchester United U19s were qualified in the next round without kicking a ball due to the result between Villarreal and Atalanta.

A good result was still needed to keep the spirits high and finish the group stages. Last time United U19s were in action in the UEFA Youth League, it was quite an eventful encounter, as Mather came from the bench to win it for us.

It was a quiet start of the game here with the U19s in early control of the ball with Oyedele moving forward and giving United options in attack. It has be noted that Svidersky was playing on the heart of the defence while we are usually see him play in midfield breaking up play.

Moving the ball well, dominating in ball possession and very clever passes — that was United’s plan in the first 10 minutes. Sooner rather than later United had their first dangerous moment as Hansen-Aaroen’s low cross from the right met Garnacho but unfortunately his effort hit the post. This is followed by a chance for Jurado, however, nothing came out of it.

In what seemed all United, some confusion around the box from Murray gave Young Boys an unexpected chance. Mastny put a brave face quite literally on the line to make a save.

After a while it seemed that United had regained control of the game, with Hansen-Aaroen once again quite active on both wings. However, neither was making a benefit out of the passes from the young Norwegian. Mainoo was once again moving well on the box but no end product at this point of the game for the young Red Devils.

Young Boys U19s finally moved into the game as Berisha forced a save on Mastny. As we approached the half hour mark, United captain Jurado was brought down injured and coach Neil Wood was obliged to make a change as Ogunneye made his U19’s debut.

Svidersky was now in charge of the captain’s armband.

Things managed to work out late in the first half for Manchester United as an amazing McNeill pass found Garnacho, who made no mistake, giving United the much-deserved lead.

The youngster almost scored another in just a couple of minutes, but the goalkeeper was well positioned.

United started the second quite well but things were not working in the final third with no noticeable chances from the youngsters in the opening 10 minutes. Young Boys stepped up their game and this caused some trouble for United after a poor tackle from Fredericson. De Donno was brought down inside the penalty box and the referee blew the whistle.

Then United made a series of changes as Hoogewerf and Ennis came in and a few moments later, United were obliged to make another substitution as Ogunneye left the pitch injured and in it came Aljofree.

In what seemed to be a balanced second half, Charlie McNeill and Hansen–Aaroen found the perfect moment to get United back in the lead. Isak’s brilliant pass found Charlie who did well enough to lobby a ball over the keeper. What followed were two clear chances for Young Boys, but Mastny was in position. Also, Murray did well enough to clear the ball off the line and keep United ahead.

After seven minutes of added time, the referee blew the whistle and Manchester United won their final game of the group stages. Five wins in six games for the U19s, an excellent result with lessons learnt as well.