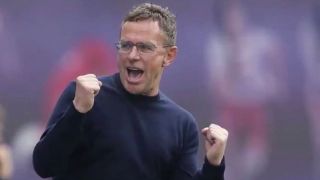 Manchester United are preparing to face Swiss side Young Boys in their sixth and final game of this season’s Champions League group stage.

The Red Devils, who will be playing at home under the famous Old Trafford floodlights, are set to field a much-changed starting 11 that includes several fringe players.

Now managed by interim manager Ralf Rangnick, the likes of Donny van de Beek, Jesse Lingard and Amad are all set to be awarded rare starts.

However, in addition to fringe players getting game time, Rangnick has also entrusted several youth players, including Anthony Elanga.

Not only does the Red Devils’ starting 11 include youth products, but their bench also does too.

Discussing his reasoning for gifting some young players the chance to shine on Europe’s biggest stage, Rangnick, who spoke to the club’s media team, said: “They were training with us yesterday and today, so they were already part of the training session and they should just enjoy themselves in the game.

“They should play with no fear, always on the front foot, proactive, that is what I would like to see.

“Then they can even make a mistake and it doesn’t matter.”

United’s match against Young Boys is scheduled to kick off at 8 pm (UK time) and will be broadcast live on BT Sport.