As per usual, with every Manchester United match, I challenge myself with predicting the line-up. A harmless bit of fun that brings up some important talking points ahead of the match against Young Boys.

Coming up against Young Boys in the final Champions League group game at Old Trafford, Ralf Rangnick knows United are set to finish on top after booking their place in the knockouts, but he still wants his players to respond after losing 2-1 to their Swiss opponents in September.

Although Cristiano Ronaldo opened the scoring after 13 minutes, Young Boys managed to shock United by two second half goals to win the match. It was a real blow and knocked momentum further as Ole Gunnar Solskjaer lost his job in October. Thankfully Michael Carrick was able to stand-in to secure United’s place in the knockout phase, with a convincing 2-0 victory in Villarreal.

It is now Rangnick’s job to get the most out of these players and he has already hinted at resting some for tomorrow night’s game. On top of that, the German confirmed that Nemanja Matic will captain the side and he will be handing starts to Dean Henderson and Donny van de Beek.

The Reds can’t afford to field a full-strength XI for this one with important but winnable fixtures coming up in the Premier League. It should help that we are playing against an average side, albeit one that beat us recently, with a squad of players all trying to impress the new manager.

We can see Eric Bailly being recalled to the backline for this one, with Luke Shaw and Aaron Wan-Bissaka returning to their roles at full-back. There is a strong likelihood Harry Maguire will be rested with Matic honouring the armband, so I have gone with Victor Lindelof at centre-back in a back four.

In midfield, we can see a double pairing (4-2-2-2) of Matic and Scott McTominay behind Jesse Lingard and Van de Beek.

Up top, Mason Greenwood will get his first start under Rangnick, who we believe will hand Anthony Elanga his Champions League debut. 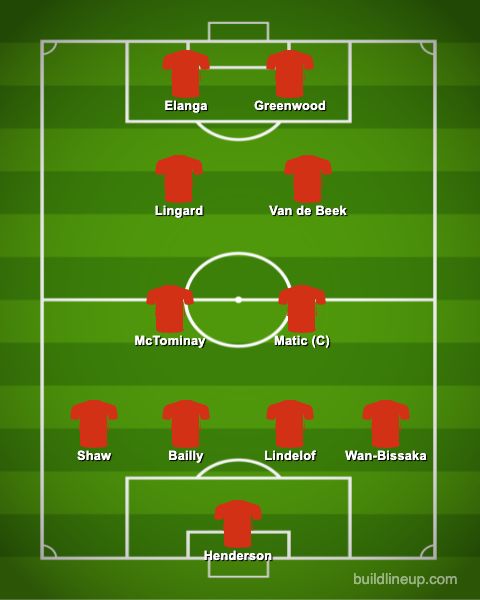 Elanga replaced Marcus Rashford in the 76th minute on Sunday to make his first Premier League appearance of the season after impressing in training. He was an unused substitute in our first three Champions League games of the season under Solskjaer, but it sounds like it is time for his first taste of senior European football.

I think that is a team more than capable of getting a win against Young Boys.