Predicting a new manager’s first line-up may seem an impossible task to some, but we don’t think there will be any surprise when it comes to who starts in goal.

Although he raised eyebrows after crumbling on the floor for Emile Smith-Rowe’s opener on Thursday night, David de Gea has been in fine form this season and it would be a shock if Rangnick selected either Dean Henderson or Tom Heaton ahead of the Spaniard for this one.

In defence, I think we’ll see Diogo Dalot and Alex Telles operate at full-back. They both played well against Arsenal and it’s not like they are replacing two in-form players.

Harry Maguire will lead from the back alongside Víctor Lindelof – but for how long if the German coach persists with a high-defensive line?

I also have a feeling that Rangnick will start with a 4-3-1-2 – with a midfield diamond consisting of Scott McTominay, Fred, Donny van de Beek and Bruno Fernandes.

The Sun consider Cristiano Ronaldo a major doubt after injuring himself mid celebration, so I have gone with Marcus Rashford and Jadon Sancho up top to face Palace.

Rangnick could also start with Mason Greenwood, who he mentioned more than once in his first press conference as United manager on Friday morning. 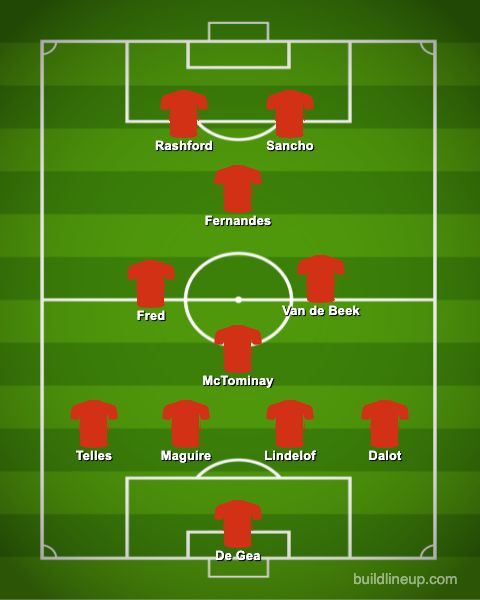 Let us know what you think of this XI prediction in the comments section.

Update: Ronaldo was spotted with the team at the Lowry Hotel last night, so there’s obviously a chance chance he will start up front. Who does that potentially leave out?

3 responses to “Predicted Man Utd XI vs Crystal Palace: Rangnick to opt for a midfield diamond”