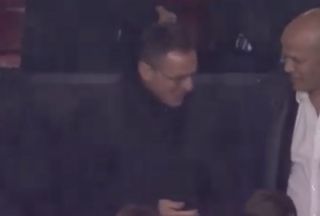 Despite overseeing two wins and one draw in their last three games, stand-in boss Michael Carrick is now preparing to make way for the incoming Rangnick.

Although the Red Devils confirmed the German’s appointment several days ago, work permit regulations have meant he will not be in the dugout until next weekend when United host Crystal Palace.

However, after being present at Old Trafford for Thursday’s match against Arsenal, after watching on as his new side ran out 3-2 winners, Rangnick’s full-time reaction was picked up on Amazon Prime’s cameras.