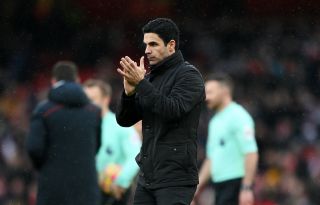 Manchester United will be looking at getting back winning ways when they take on Arsenal in the Premier League at Old Trafford, on Thursday night.

The Reds go into the game on the back of a 1-1 with Chelsea at Stamford Bridge, whilst the Gunners ran out 2-0 winners over Newcastle United at the Emirates.

Cristiano Ronaldo is widely expected to return to the starting eleven to face Arsenal having been on the substitutes bench against Chelsea last weekend.

Donny Van De Beek could also be handed a start.

In what has been a difficult few months or so for Manchester United, a corner looks as though it has finally been turned.

Securing a spot in the UEFA Champions League last 16 was a massive step forward for the club and taking a point at Chelsea are all positive signs that the team is getting back on track and moving in the right direction.

Arsenal have made a promising start to the season under head coach Mikel Arteta and currently find themselves above United — sitting fifth in the table.

Games against Arsenal in the past have always been lively affairs and I expect Thursday night to be no different.

Going forward with Aubameyang, Lacazette and the likes, Arsenal can cause you all sorts of problems but defensively they are there to be got at and with Ronaldo, Fernandes and co all likely to start United certainly have enough firepower to cause the Gunners back four all sorts of problems.

It’s a game that’s likely to be an entertaining affair and one which I think United will win.