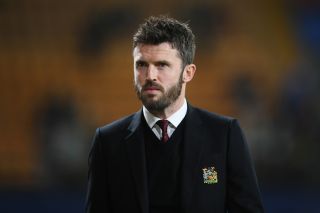 Manchester United are back in Premier League action this afternoon in what could be Michael Carrick’s final game in charge of the side before an interim manager is appointed. Ralf Rangnick has been strongly linked with a move to the club and an agreement is pending.

Manchester United travel to league leaders Chelsea on Sunday and Carrick has been a series of bold selections, with the exclusion of Cristiano Ronaldo standing out.

Ronaldo is United’s top scorer this season and after scoring the decisive goal against Villarreal in midweek, he has been dropped to the bench for the clash at Stamford Bridge. Some fans have questioned the decision on social media, as seen below.

I don’t know about not starting Ronny 🤷‍♂️

Ronaldo on the bench is a massive call. Matic in midfield? 🥴 No Donny. Bruno possibly a false No.9? So many questions.

Lineup seems mad but lets see how we play. https://t.co/jk8QX0xIRY

Brave call to bin Ronaldo but you can’t counter press with him in the team. Wonder if Carrick’s has a zoom call with Rangnick in the last couple of days.

SN’s verdict on Ronaldo’s exclusion…
It’s certainly a bold move by Carrick to leave Ronaldo out of the starting line-up but only time will tell if it’s the right decision or not. Ultimately, football is played on the pitch and not on paper.

United will lose Ronaldo’s finishing and instinct but in his absence, they can adopt a pressing style that eluded Ole Gunnar Solskjaer before he was sacked last week.

Although he won’t be starting, Ronaldo will be desperate to stamp his authority on the bench when he’s introduced as a substitute, which is almost a certainty.