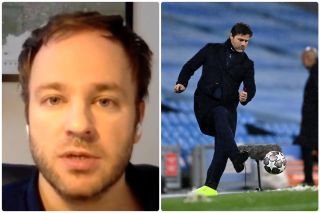 French football expert Jonathan Johnson has appeared on Sky Sports News to discuss what it would take for Manchester United to prise away Mauricio Pochettino from Paris Saint-Germain.

“The only real option is for Manchester United to pay out Pochettino’s remaining duration of his contract.”

United will have to pay £8.4m if they want to pay Pochettino’s compensation package to the French giants, as per Sky Sports, but I believe PSG will want to make sure Zidane is ready to takeover first.

Reports of a dream scenario have come from France suggesting Zinedine Zidane will end up at PSG, replacing Pochettino, who will then finally end up at Old Trafford.

According to The Independent, PSG are already in contact with Zidane.

The claims don’t make it sound like PSG would be bothered because they want Zidane so much, which is exactly what Johnson says in the video below:

🗣"The only real option is for #MUFC to pay out Pochettino's remaining duration of his contract."

French football expert Jonathan Johnson discusses what it would take for #MUFC to prise away Mauricio Pochettino from PSG 💰 pic.twitter.com/lmASsthl73

Moreover, the Manchester Evening News reports that Pochettino wants the United job straightaway, with the club ‘confident’ they can get a deal done to make him their next manager.

We could end up with the best scenario sooner than we think but I wouldn’t count my chickens knowing Ed Woodward will be working on this deal.

United need to sort this mess out now, with a permanent manager. Not some scapegoat on an interim basis.