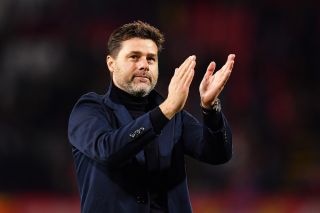 Manchester United are in need of a new permanent manager.

Following a 4-1 thumping away to Watford, former manager Ole Gunnar Solskjaer was relieved of his duties on Sunday.

The Red Devils, now being temporarily managed by Michael Carrick, had originally planned to replace Carrick with an interim boss before settling on a new long-term permanent manager at the end of the season.

However, according to a recent report from MEN, there is mounting pressure on the club’s hierarchy to ditch those plans and move for a permanent manager as soon as possible.

Although heavily linked with the likes of Zinedine Zidane and Brendan Rodgers, MEN claim the former was never really viewed as a realistic replacement.

However, Rodgers, who did hold talks with the Red Devils prior to Solskjaer’s sacking, appears to have distanced himself from the role in recent weeks.

This has now opened the door for PSG’s Mauricio Pochettino to make a sensation return to the Premier League.

Currently plying his trade in France, the highly-rated Argentine has been linked with managing Manchester United for several seasons – dating as far back as his dismissal from Tottenham Hotspur in 2019.

However, after so far failing to land the biggest job in world football, the next few weeks could prove decisive in the career of Pochettino.

Although it has been suggested that United are growing increasingly more confident they can land Pochettino – there will be a lot of work to do before they can officially unveil the South American.

Having signed a new contract only this year, getting him out of Paris will cost around £10m (Mirror), and then there are all the other terms that will need to be agreed upon.

Whether fans will see Pochettino in the Old Trafford dugout before Christmas remains to be seen – but one thing is for sure, when it comes to managerial upgrades, the Red Devils could definitely do a lot worse than the former Spurs boss and one of football’s brightest minds.