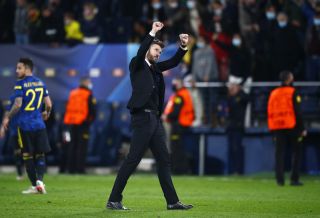 Job done in Villarreal as Manchester United secure their place in the knockout stages of the Champions League.

It was Michael Carrick’s first time in the dugout as a manager, standing in as caretaker boss, just days after Ole Gunnar Solskjaer was sacked.

The Geordie got his managerial off to a flying start with United progressing in Europe’s biggest competition, but nobody will be expecting the former midfielder to land the job on a permanent basis anytime soon.

You could say he was thrown into the deep in and that Carrick overcame it by getting his tactics spot on. He even threw a spanner in the works with his line-up after deciding to leave Bruno Fernandes out for Donny van de Beek.

It was a defensive performance for the first 60 minutes.

That was before Carrick made some attacking substitutions to give the side more firepower in the final third.

The Portuguese talisman gave United the lead with a wonderful goal before Jadon Sancho struck home his first for the club.

At least United can now go to their managerial candidates with the promise that they will be in the latter stages of the Champions League, which in turn means Mauricio Pochettino could still set his aims on winning the competition this season – but with Cristiano Ronaldo rather than Lionel Messi.

Carrick will be happy with how the players responded tonight. They certainly looked more organised at the back.