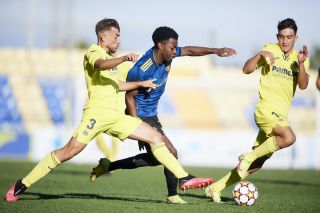 Manchester United U19s were under way at Villarreal with the young Reds looking forward to take revenge on what happened the last time the two teams faced one another.

This Villarreal team has done very well during the group stages and United U19s needed to continue their good form.

Villarreal started the game very well as Manchester United were trying to hold back a little, a lesson learnt from the last game.

In the opening ten minutes, the hosts saw the best out of possession and United were inviting pressure. United’s keeper Vitek was called on duty as Pascual forced a save on him. Meanwhile, when United moved forward, it seemed like a case of deja vu of what constantly happens in the league.

Hannibal Mejbri was being constantly targeted and strangely enough the referee did not seem much bothered much from this fact. It has be noted that United still were struggling to get into the game.

Once again Villarreal went forward through Pascual and Jimenez, but United are lucky as Jimenez fired it over. Pascual was once again the protagonist, but Vitek was once again very cautious and it was a brave save from the United goalkeeper.

This United back four needed a wake up call and Pascual’s movement outside the box was only cut in half from the offside flag. It was a problematic situation as Mengi thought he was in trouble, but the referee was cautious this time. In a situation where Villarreal had dominated the half, well it was not a huge surprise that Jimenez finally fired in a bouncing ball. This however did not serve as a big deal to United as they continued to struggle once again, Vitek making some brilliant saves to deny Villarreal from doubling their lead.

The only times United moved forward, Villarreal were prepared to break play as it was so obvious that they were targeting Hannibal once again. As the referee blew the whistle to end the first half, coach Neil Wood would have a lot to discuss with his team during the break. In paper, that midfield would actually dominate the side, but it felt like United were afraid to move forward and highly relying on Hannibal. A different approach was needed.

Whatever was said in the dressing room at half time, seemed to have done wonders at this team. These youngsters were clearly warned what Villarreal were capable of when they first faced them and they had not taken notes. However, there was still a second half left to play and things changed. United were approaching a more attacking style of play and this was noticed with Fernandez’s movement at wing back meanwhile Elanga from the other wing was finally moving. It all started with a Mainoo chance at the beginning of the second, as Jorgensen was called in action.

Villarreal were given an early signal that things would change and they were found in a difficult moment as United counterattack ended with a powerful shot from Hansen-Aarøen. What remains a constant in this game is the Villarreal players causing a foul on Hannibal and the referee doing absolutely nothing about it. All the work United had been doing throughout the second half finally paid off as McNeill scores from a close range as Elanga was selfless on passing that final ball towards the young English player. In the following minutes it was all United doing everything well and they almost took the lead through Savage at first and then Hansen-Aarøen who was not quick enough to hit the ball in the rebound.

United’s defence were doing much better in the second half as captain Mengi was leading by example and Villarreal were left with such little space to move forward and attack United. It is incredible how much can change in just a little time as United looked completely different and we’re dominating Villarreal. While all the team stepped up, a special mention goes to Teden Mengi who took the risk and moved a bit more forward and the game flow was brilliant ever since. The change setup that was made at the left flank gave its fruits as a beautiful combination from Fernandez and Elanga was enough to set a ball for Mather who made no mistakes and put United ahead. The following minutes was United keeping their opponents on check and trying to score another goal. Elanga was brought down inside the box but his penalty appeal was in vain as the referee said play on.

After five minutes of added time, the referee blew the final whistle meaning that United were moving top of the group, getting revenge for that loss in the previous encounter and playing incredibly well in the second half.