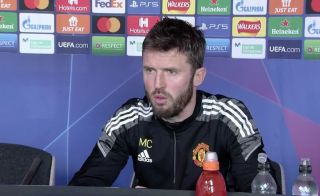 Michael Carrick is set to take charge of Manchester United for the first time tomorrow as his side makes the trip to Villarreal. Ole Gunnar Solskjaer was sacked on Sunday following a drab 4-1 defeat to newly-promoted Watford.

The Norwegian spent almost three years managing the side but has now been relieved of his duties. Carrick, who has been a part of the coaching setup since his retirement in 2018, will now take interim charge until a permanent manager is in place.

All eyes will be on Manchester United tomorrow, with a crucial Champions League night looming large. Carrick will be forced into one change – Luke Shaw is unavailable after sustaining a head injury against Watford.

Diogo Dalot will be hoping for a chance to impress but Alex Telles is more likely to replace the 26-year-old England international.