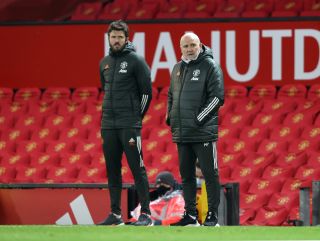 Busy week ahead for Michael Carrick and Manchester United.

It properly starts today, 24 hours after Ole Gunnar Solskjaer’s dismissal, when the players will be put through their paces and begin preparation for Tuesday night’s Champions League tie.

United are currently leading Group F with two matches left to play, but are level on points with Unai Emery’s Villarreal, with Atalanta only two points behind as they face Young Boys in Switzerland this week.

Carrick will oversee affairs – including Monday’s press conference at 13:00 GMT (shown on MUTV) — while United seek an interim boss before finding a permanent replacement next summer.

I have not known Carrick to answer tough questions unless it’s been on the pitch, so you can be sure the media hounds will be sniffing for quotes this afternoon to gather more updates on United’s search for a new manager.

Carrick needs to quickly overcome the news that Solskjaer has been fired to focus on tomorrow night’s game, but the press conference may help as an introduction to the role because he has never been in a position like this before.

It will also be interesting to see who will be kept on long-term from Solskjaer’s backroom staff as Mike Phelan, Kieran McKenna and Carrick will carry on with their duties until told otherwise.

Stay tuned for coverage from the press conference.