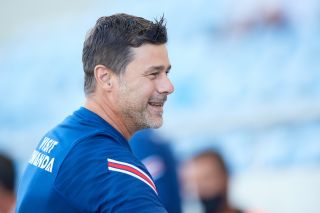 It’s almost been 24 hours since Ole Gunnar Solskjaer’s sacking, with Manchester United searching for an interim appointment and a permanent boss.

Life could be about to get a lot easier for the club, though, especially if they could just hire Mauricio Pochettino now.

I asked our Twitter followers for their thoughts on a poll (still running) last night and it would seem that fans would pick Ten Hag over Pochettino, as seen below:

Who is your pick to take charge as of now? 🤔 #MUFC

According to the Daily Mail, Pochettino would drop PSG now if United want him.

The Argentine is said to be up for a move now despite still being in charge of Ligue 1 leaders Paris Saint-Germain, after becoming fed up of the egos he currently has to deal with.

He also finds himself in a bit of a Jose Mourinho situation – by living in a Paris hotel while his family remains in London — which is an unsustainable way of living.

This season, the French giants are gunning for the UEFA Champions League after signing an array of players in the summer, including Lionel Messi.

Can Pochettino come in and turn things around?