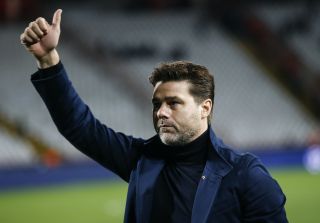 Manchester United’s managerial hunt has only just started but according to reports, the Old Trafford club have their eyes set on Paris Saint-Germain boss Mauricio Pochettino.

The 49-year-old dazzled the Premier League over his six-year spell at Southampton and Tottenham, before replacing Thomas Tuchel in the French capital.

Ole Gunnar Solskjaer was sacked by Manchester United in the aftermath of his side’s 4-1 defeat to Watford and Michael Carrick will now take temporary charge of the team.

Pochettino, who has been linked with a move to United on several occasions before, is contracted at PSG until 2023 but could be about to end his tenure there after less than one year.

According to the Daily Record, Manchester United have made the Argentinian their preferred choice to replace Solskjaer and are now exploring whether a mid-season switch is possible.

In the most positive update yet, the report claims that the Old Trafford hierarchy has drawn encouragement by the speed at which Pochettino has signalled his intent to leave PSG, with discussions over buying out his contract underway.

Furthermore, Pochettino is said to be unhappy at the French giants and is ready to take over at Manchester United.

SN’s verdict on Pochettino potentially replacing Solskjaer…
Just over a year ago, Solskjaer was in real danger of being sacked after a poor start to the 2020/21 campaign. Instead, he survived and guided United to their best Premier League campaign since Sir Alex Ferguson retired.

Pochettino was also linked with the job then and in truth, it does look like he is the club’s first-choice target. The possibility of an interim manager being introduced could be catastrophic.

This season is still salvageable and Pochettino’s readiness to complete a mid-season switch is a positive sign. His experience in the Premier League is also crucial.