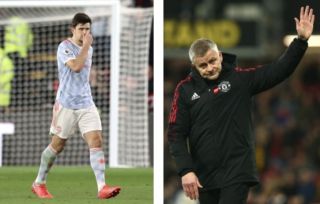 Manchester United captain Harry Maguire was reportedly spotted out on a night out following the Red Devils’ 4-1 hammering against Watford.

Maguire put in a particularly poor performance against the Hornets after being sent off following two yellow cards.

The Red Devils’ shocking display at Vicagare Road undoubtedly led to the sacking of manager Ole Gunnar Solskjaer, who has left the club on Sunday morning.

The social media post, which has gone viral, appears to show Maguire enjoying some nightlife with a friend just hours before his gaffer was dismissed from his role.