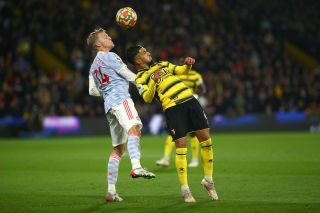 Following Manchester United’s disastrous 4-1 defeat to Watford on Saturday, the focus has largely been on Ole Gunnar Solskjaer, who is likely to be sacked as the club’s manager.

The defeat left United with just 17 points after 12 Premier League games, with some reports even claiming that Solskjaer has already said his goodbyes to his staff and players.

In quite ironic fashion, Donny van de Beek scored what looks like the final goal under Solskjaer. The 24-year-old midfielder has often been overlooked by the Norwegian and is yet to start a league game this season.

Introduced as a half-time substitute against Watford, Van de Beek looked like a man on the mission and with a whole lot to prove. It didn’t take long for him to score United’s only goal of the game and he is now the subject of praise from David de Gea.

“He’s been great, he showed character, passion,” De Gea is quoted as saying by the official Manchester United website. “I’m very happy for him, he deserves it. He played very good.”

SN’s verdict on Van de Beek’s future following the news of Solskjaer’s sacking…
Perhaps a managerial switch is exactly what was needed for Van de Beek to kickstart his career again. The Dutch international has stagnated since joining Manchester United and could now be set for a new lease of life.

It remains to be seen who Solskjaer’s long-term replacement is but if Van de Beek had any intention to leave the club in January in search of regular football, he might be forced into shelving those plans now.

Manchester United have a bloated squad and not every player can play but Van de Beek’s impressive performance against Watford certainly puts him in good stead ahead of a testing period.