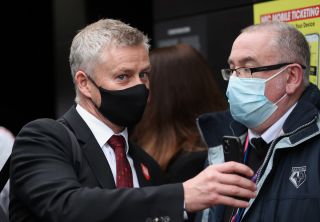 Ole Gunnar Solskjaer is set to leave Manchester United as manager immediately following a poor run of results, which has left his side with just 17 points after 12 games in the Premier League.

Saturday’s embarrassing 4-1 defeat has proven to be the final nail in Solskjaer’s coffin as the Norwegian manager is now set to be dismissed after nearly three years in charge.

Journalist and transfer specialist Fabrizio Romano has taken to Twitter to explain what’s going on behind the scenes, with the Italian expert confirming Solskjaer’s departure with two simple words: “It’s over.”

Manchester United board decision to sack Ole Gunnar Solskjær has been also approved by Glazer. It’s over. 🔴 #MUFC

Fletcher-Carrick now ready as interim solution if no instant solution is found. pic.twitter.com/oNMceD5xiE

The decision to sack Solskjaer as the club’s manager has now been approved by Joel Glazer, who heads Manchester United’s American ownership. Any announcement may not be worded as a sacking, however, with a mutual agreement thought to have been agreed.

With just over 48 hours remaining until Manchester United face Villarreal in the Champions League, former midfield duo Michael Carrick and Darren Fletcher are set to take over on an interim basis.

SN’s verdict on today’s breaking news…
Clearly, we have been heading for the inevitable for quite a while. The one detail which might bug large sections of the United support is that this decision could have been taken a lot sooner.

Following the 5-0 defeat to Liverpool, it was becoming increasingly clear that Solskjaer was out of ideas and needed to be replaced. Instead, the board stuck with their man and have fallen behind in the Premier League even further.

Solskjaer will be remembered for his fine work at the club, however. He joined a club in disarray and steadied the ship. Now, his replacement will be able to kick on with a ready-made squad.