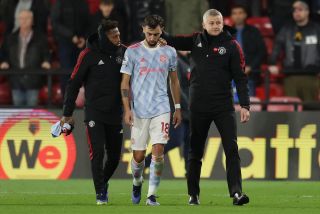 Ole Gunnar Solskjer is on the brink of being sacked at Manchester United, with the latest reports claiming his future is on the agenda in an emergency board meeting following a disastrous defeat to Watford.

After the 4-1 defeat to Watford, there were claims that the Manchester United board had called an emergency meeting to discuss Solskjaer’s future, with his compensation terms said to be on the agenda.

Solskjaer has overseen just one win in their last seven Premier League games, a run which has left his side with just 17 points from their opening 12 games in the Premier League.

Now, journalist and transfer specialist Fabrizio Romano has confirmed that Manchester United are in talks to sack Solskjaer after the embarrassing performance at Vicarage Road, as seen below.

Final choice will be up to Joel Glazer. pic.twitter.com/3YZXL3PbYh

Solskjaer losing his job is now seen as a ‘serious possibility’ but the final decision is still in Joel Glazer’s hands, who has been reluctant to sack the Norwegian up until this point.

SN’s verdict on the latest reports…
It does feel like the inevitable has been delayed for quite a while now. Following the 5-0 defeat to Liverpool, large sections of the Old Trafford support turned on the manager and it looks like the board has as well.

In the 48-year-old’s defence, he has done a decent job prior to this season and he will hope that’s not forgotten. He has built a squad capable of challenging but unfortunately, he couldn’t be the one to lead United to their first major honour since 2017.