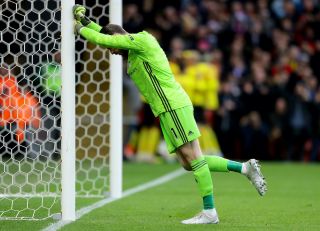 Manchester United will be looking at getting back to winning ways when they take on Watford at Vicarage Road in the Premier League, on Saturday afternoon.

The Reds go into the game on the back of a bitterly disappointing 2-0 defeat to Manchester City at Old Trafford before the international break, whilst the hosts were defeated 1-0 by Arsenal at the Emirates.

Head coach Ole Gunnar Solskjaer will be without duo Paul Pogba and Raphael Varane for the clash against Watford, with Edinson Cavani also considered a doubt as he recovers from a tendon problem.

It has been a tough few months or so for Manchester United and Solskjaer. After such a bright start to the season, the wheels have fallen off and with recent defeats against arch-rivals Liverpool and Manchester City still fresh in the minds, it’s pivotal United get back to winning ways if they are to turn this season around — starting with Watford on Saturday afternoon.

Watford have endured a disappointing start to the season and currently find themselves sitting in 16th position in the league table. The recent appointment of Claudio Ranieri has lifted morale at Vicarage Road but the Hornets still remain one of the favourites to go down this season and this is a game United will undoubtedly expect to win.

Despite the recent set backs, it must be remembered that United are still only nine points off leaders Chelsea and with games coming thick and fast over the coming weeks, it gives the Reds a great opportunity to close the gap and get their season back on track.

Beating Watford won’t make the defeats to Liverpool and Manchester City feel any easier nor will it ease the pressure on Solskjaer, but it will help United get back to winning ways and in doing so move us closer to leaders Chelsea at the top of the table.