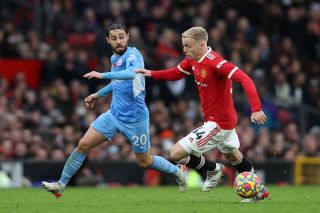 Manchester United are gearing up for their return to Premier League action this weekend as they make the trip to Vicarage Road to face Claudio Ranieri’s Watford.

Ole Gunnar Solskjaer is fighting to keep his job at Manchester United and is in desperate need of a good result on the road, with his side registering just one win from their last six in the Premier League.

The Norwegian will be without French duo Paul Pogba and Raphael Varane, with the pair serving a suspension and recovering from injury respectively.

International breaks are rarely positives for managers but on the other hand, outcasted figures can use the two-week circuit breaker to impress their manager and that’s exactly what Donny van de Beek has done.

The 24-year-old is thought to be in consideration for a start against Watford, having failed to start a league game so far this season.

Solskjaer is expected to field a recognizable side, despite United’s worrying form. The backline will most likely include the usual suspects, whilst Van de Beek could partner Fred or Scott McTominay in midfield. McTominay missed both of Scotland’s World Cup qualifiers with a throat virus and will be assessed prior to Saturday’s kick-off.

Mason Greenwood and Jadon Sancho both remained at the club over the international break and will be unlucky to not start the game, but Marcus Rashford is also in with a shout.

Bruno Fernandes and Cristiano Ronaldo are near-givens in the side each week and their stellar partnership over the last couple of games proves how important they are to their side.